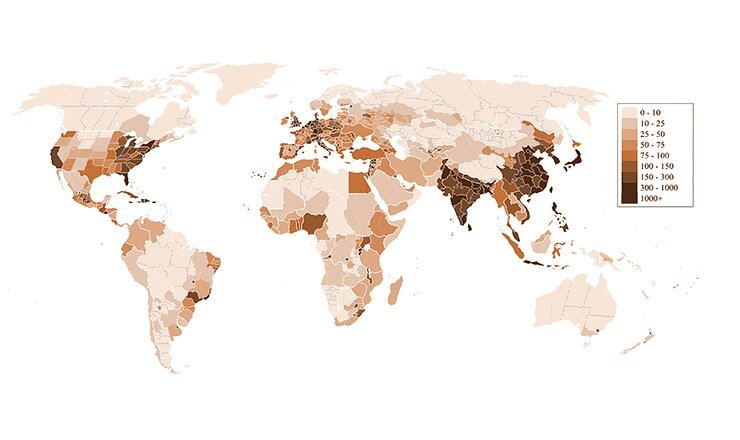 Humans didn’t dominate this planet until very recently. For 200,000 years, we clawed and scratched our path to survival alongside every other creature that crawled this planet. Only 200 years ago, half of all newborns didn’t make it to their fifth birthday. That’s why July 11th, 1987, was seen as a day of celebration- the day the global population reached five billion.

To commemorate this milestone, the United Nations declared the day an annual event, called World Population Day, to raise awareness about issues that effect the entire human community. They established the United Nations Population Fund (UNFPA), which sought to create a world where “every pregnancy is wanted, every childbirth is safe and every young person’s potential is fulfilled.” This year’s World Population Day is special because it marks the 25 year anniversary of the 1994 International Conference on Population and Development, where UNFPA set ambitious goals for the future.

For the most part, they’ve made great progress on those goals. The number of children who don’t live to see their fifth birthday has been cut in half, as well as the number of children who don’t attend primary school. UNFPA has also helped reduce maternal mortality, and provide access to reproductive health and family planning services across the globe, but these issues still need attention.

Regardless, the UNFPA’s efforts have uplifted the entire human species. Now, the world population stands at over 7.7 billion. 30 years ago, this feat may have been something to celebrate, but today there is cause for concern. Now, we know that Earth is struggling to support the weight of our accelerating growth.

Problems of a Privileged Population

UNFPA’s mission to bolster the developing world is important for humans and the planet. Educating young girls and providing family planning services can enhance quality of life for growing nations and help stabilize the overall population. Project Drawdown, a world research organization that identifies our best strategies for minimizing climate change, ranks educating girls and family planning as number six and seven on their top ten list of global climate solutions.

However, we also have to consider the implications if developing countries adopt a “developed” lifestyle. Research shows that first-world food waste and dietary choices are two of the largest contributors to climate change. That’s why better food waste management and a plant-based diet rank higher on Drawdown’s list in terms of environmental impact.

Collectively, a third of our food goes to waste, accounting for 8% of global emissions. In low-income countries, this food is lost before it reaches the supermarket due to problems with distribution and storage. In high-income countries, a third of perfectly edible food is wasted by consumers and retailers for superficial reasons, like bumps and bruises.

The Western Diet comes at an even higher environmental cost: one-fifth of global emissions. This is in large part due to the first-world obsession with beef, and the detrimental effects of cattle farming. Adopting a plant-based diet has the potential to eliminate 70% of greenhouse gases.

This World Population Day calls for a new set of goals. UNFPA is doing their part to uplift the global human community, but we must do our part as humans to make sure there’s still a planet when their mission is complete. There are many strategies for transitioning to a plant-based diet, from meat substitutes to Meatless Mondays, and every effort counts. If every other burger Americans ate was plant-based, there would be no need for further deforestation in the Amazon. To eliminate food waste, don’t judge a fruit by its color! Consumers throw away perfectly good food every day because of irrelevant aesthetic standards. At the retail level, there needs to be a shift in food waste policy.

Humankind has come too far to lose it all to greed and over-indulgence. Developing countries are growing stronger every day, looking to the first-world horizon. For this reason, developed nations need to present a better ideal to strive for, starting with the plates of the privileged.