We live in an era where we spend most of our waking hours staring at a screen. In fact, the latest Digital 2019 report showed we’re spending an average of 6 hours and 42 minutes online each day.

That said, it’s not all bad. The internet has yielded plenty of forward-thinking frills. It’s increased productivity, connectivity, and has provided a bottomless bookshelf for data and information. However, not one of us is naïve to the pitfalls of the internet, either.

One of the most potent, yet lesser-known, side effects of our global internet addiction is its massive carbon footprint. 90% of the 75 million servers that host websites are powered by fossil fuels. The internet’s reliance on dirty energy is so significant that its CO2 emissions surpass that of the entire aviation sector. That makes it the largest producer of greenhouse gases after the United States, China, and India.

As the number of people online continues to compound, so does the demand for energy to keep the globe connected. The internet has hooked its claws so deep in the cavities of our society, that it’s impossible to imagine a world without it. It’s becoming a part of us. It’s the most significant thing we’ve built as a species. A widespread sanction or cutback would have far-reaching effects on financial development, economic growth, and global trade openness.

In 2010, Greenpeace called on major internet companies to power their data servers on renewables. Ever since, internet giants – Facebook, Google and Amazon among them – have made commitments to green-ify their operations, but it’s proven an arduous and complicated task. Some companies have fared better than others.

Amazon continues to be a major purchaser of electricity. Twitter and Vimeo fall behind the new sustainability standard. Popular video streaming services – Netflix and HBO – aren’t meeting the mark either. In fact, online video streaming still produces about 300 million tonnes of carbon dioxide a year.  As video quality improves and consumers choose higher-resolution options, pollution is fated to get worse. 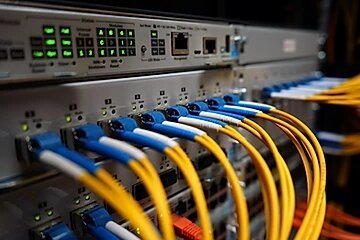 More and more, corporate commitments to sustainability draw skepticism from consumers. Many brands project vague and ambiguous sustainability goals – without concrete benchmarks to substantiate their claims.

On the opposite side of the spectrum, both Apple and Google continue to lead the sector in their commitment to renewables. In 2018, Google even bought enough renewable energy to power office and data centers. However, just because they’re no longer polluting our planet, doesn’t mean they’re helping it. In the corporate world, there is an obvious and reoccurring commitment to “protect” the Earth, but not necessarily to repair the damage that has already been done.

While it’s easy to sit here and shake our fingers at these corporate powerhouses, they cannot be fully blamed. It is we the consumers that require instant gratification and are driving the massive escalation in e-fulfillment.

So, what can we do? We search smarter.

While you probably use Google, Yahoo, Bing or one of the other popular search engines, you could be using Ecosia, a greener alternative. Ecosia is an environmentally-friendly search engine that plants trees with every search. For the working adult or parent, this means there is a simple, effective way to help the environment without disrupting your busy routine.

Just one search removes about 1 kg of CO2 from the atmosphere. That means, if Ecosia were as big as Google, it could absorb 15% of all global CO2 emissions.

Why settle for carbon neutral, when we can be carbon negative? Let’s start not only protecting the Earth, but repairing it as well. Download the extension below and let’s reverse deforestation one search at a time.