Regulation vs Technology in the Abuelas de Canarias

A cascade effect of stress occurs, both within the Earth and within us, when precious and rare global elements are threatened.

In 2019, ABC Spain reported that the Ramform Victory, an 86-meter seismic vessel owned by the Japanese government, had been spotted suspiciously circling the area for days off the south of Maspalomas in the Canary Islands. This was unusual behaviour for a geophysical exploration boat designed to blast seabeds in search of oil and gas reserves. It put environmental organizations on edge, as the area holds large amounts of precious and rare earth metals including tellurium and cobalt.

Spanish NGO Ecologists in Action stated that it is, “deeply concerned” that “from their trajectories south of Gran Canaria in recent weeks, there are vessels evidently engaging in prospecting.” They said the suspicious boats are searching for minerals found in the Abuelas de Canarias, a band of more than one hundred volcanic seamounts situated in a 200-mile strip primarily in the southeast of El Hierro and the northeast of Lanzarote, at depths of between 400 and 4,400 metres.

However, Ramform Victory’s agent, Canarship, as well as the Spanish authorities, have denied any mineral prospection work going on in the Canaries.

“There is no deep-sea mining,” said Javier Gonzales of the Geology and Mining Institute of Spain (IGME). The tellurium and cobalt are too deep, he added, with the largest deposits between 1,000 and 4,000 meters under. “They could not be put to industrial use for at least ten to fifteen years.”

Gonzales, who is in charge of monitoring mining activities in the area, is surprised at the accusation from environmentalists since, “there is not the technology to carry out prospecting at such depths.” Canarship has also rebuffed accusations, saying Ramform “has at no time undertaken surveys or prospections of any kind.” 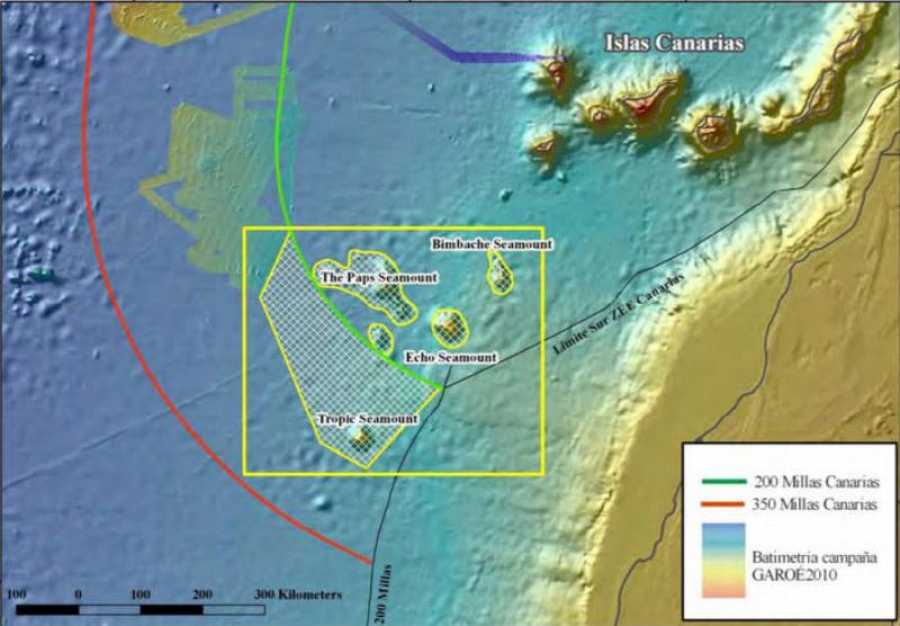 The Abuelas seamounts are under Spanish jurisdiction, except for the seamount Tropic, at a depth of four kilometers. In January 2020, diplomatic tensions arose with the government of Morocco over its attempts to lay claim to the international waters near Spain’s Canary Islands — which include Tropic.

The Abuelas hold large concentrations of cobalt antimony, arsenic, manganese, lead, nickel and molybdenum. Tropic’s ferromanganese crusts are very rich in newly discovered tellurium, which is largely used commercially in semiconductors. British researchers in 2017 found these metals in oceanic crusts picked up from the seabed with a submarine robot.

The exploration and exploitation of the Abuelas hold high commercial potential for the hi-tech industry. According to Science Magazine, Tropic alone might hold enough cobalt to power 277 million electric cars and enough tellurium to build solar panels generating more than half of the United Kingdom’s electricity.

However, the estimated mineral amounts are only calculations based on samples. These samples only offer a basis to know their location and the best areas from which to access them. Questions remain about how soon it could become commercially viable, and how large-scale mining could impact the marine environment.

EIA says that seamount mining would, “have enormous effects on marine biodiversity in an understudied environment, possibly affecting the entire trophic chain and even threatening fishing productivity, as well as releasing greenhouse gases sequestered in the ocean floor.” They say that these vulnerable areas serve as a habitat and nutrient source for millions of species, which is why they should be under official protection.

According to their 2020 report “Eyes That Cannot See: Underwater Mining in Spain,” the destruction or extinction of species caused by deep-sea mining could also inhibit the discovery of new medicines associated with organisms of deep oceans. They explain that the test for COVID-19 was developed using an isolated enzyme from a microbe discovered in deep water hydrothermal vents, a particularly rare habitat which is now under the threat of mining. The report highlights the risks posed by an activity “that is so difficult to control and whose consequences are unpredictable.”

According to a PNAS opinion paper, deep-sea mining could cause underwater sediment clouds containing heavy metals to be displaced hundreds of kilometers, affecting distant areas and ecosystems. Perturbations of ocean floors can have global impacts, altering the capacity of phytoplankton in regulating carbon levels.

Regulations on the Rise

EIA is part of an international campaign led by the Deep Sea Coalition, an alliance of more than 80 organizations demanding a moratorium on deep-sea mining activities while their potential impacts are not entirely understood. Among alternatives to the destruction of ocean floors, they promote making maximum use of currently available materials and mandatory recycling of waste with metal components. Currently, the rate of recycling for minerals such as lithium, tellurium or rare earth metals, which are often taken from deep seas, is below one percent.

The ISA’s efforts to launch draft regulations for mineral extraction in high seas makes 2020 a key year, according to EIA. The guidelines are currently undergoing stakeholder consultations.

The environmental organization has criticized how, over several years, Spanish public bodies have led numerous evaluations of the mining potential of areas near the Canary Islands. They accuse the Spanish government of having entrusted its representation in the ISA’s technical groups to mining industrialists inclined to exploitation. This exploitation includes IGME, and ISA also stated that they are “marginalizing the scientific community which would better contribute to conservation and analysis of the potential impacts in these environments.”

The Spanish state and Europe have invested millions of euros in projects aimed at advancing deep-sea mining which, according to the report, “put at risk that which we should protect.”

No country or organization is yet able to extract minerals lying in the depths of largely unregulated international waters. But many researchers believe that it is only a matter of time before seamount mining becomes a reality.

While it remains unknown whether prospecting in the Abuelas is underway, EIA is certain in its suspicions that international mining consortiums from countries such as the UK, Russia, France, South Korea, Japan, China, India and Spain are readying themselves, as the diplomatic fight with Morocco suggests. They are racing to collect information and advance their technological capabilities to reach seamount mineral deposits that are recognized as the most important source of elements for hi-tech manufacturing on the planet.

In the meantime, the crusty depths of the Abuelas remain undisturbed, while the race for their exploitation, or preservation, continues. 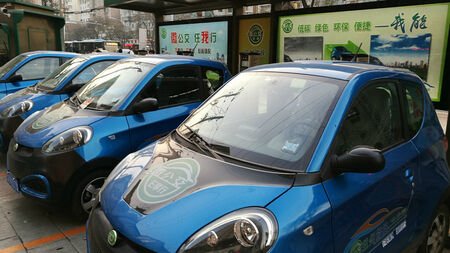 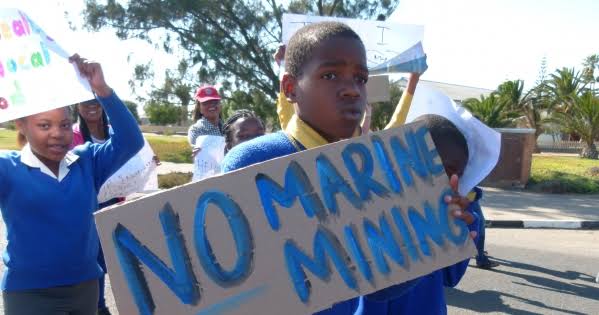 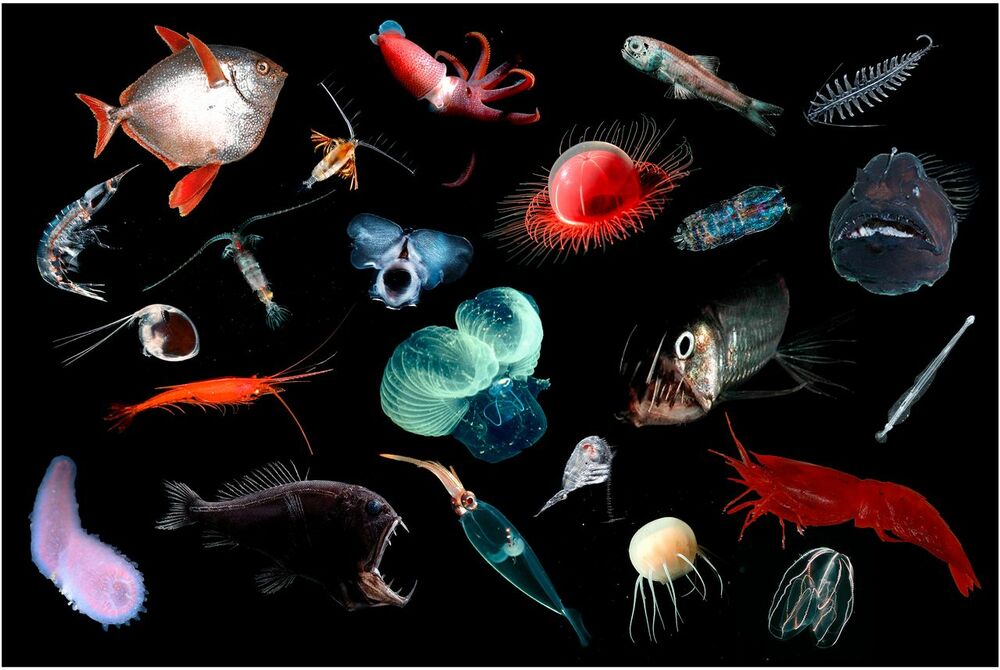