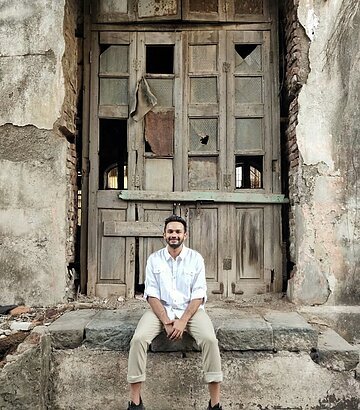 @mrearth_, aka Sagar Singh, is an environmentalist of many stripes. Take one look at his Instagram page, and his background as a social science teacher is clear. You’ll feel like a student of the Earth, learning about the predatory patterns of a praying mantis, root structures of rainforest trees, and so much more. But Sagar does a ton of climate activism outside of the classroom, too. He’s the founder of Eco Warriors India, a community effort that educates and empowers action through beach clean-ups and tree plantations. He’s also the ambassador for SeedBalls India, a movement to help fertilize the planet through fun and easy community workshops.

We were curious to learn more about this eco-activist and community leader. We had the chance to ask him what aspect of climate change he thinks needs more attention, and what he thinks is our biggest opportunity to reduce our collective environmental footprint. Keep reading to find out what he had to say.

Tell us about yourself and what you do outside the sphere of climate change?

Professionally, I’m a social science teacher. I’m planting a seed in children’s minds as to why it’s important to act now. Apart from this, I am associated with the Green Party of India. It’s a political party that helps the public understand that climate change is directly linked to policymakers. I believe it’s important to be part of a political party where youth participation is active, and there is a focus on environment and sustainability, social justice, animal rights, and equality.

As a global village, what’s our biggest opportunity to reverse climate change?

Taking accountability of our carbon footprint and shifting away from coal. Switching to clean energy and improving our food patterns from meat-based to plant-based food.

If you had a million dollars to donate to a cause, which would it be?

Installation of solar panels in the Sahara Desert and rainwater harvesting. It’s also important that schools teach students how to grow their own food and live sustainably without depending upon the government or corporations.

The average age of a politician is sixty-five. They have lived the majority of their lives already; do you think they care about what’s going to happen in the next ten years?

Are you working on a specific project that you’d like the world to know about?

Yes, I am currently working on three tree plantation projects. We’re planting 4000+ trees in Mumbai – each tree is five feet tall and has a 96% survival rate. The second project is rainwater harvesting in rural India. This project is important because the water crisis in India is severe. 151 million people across the country don’t have access to clean water. The third project is a fundraiser for a mountaineer who has climbed Mount Everest. He will be climbing Mount Annapurna next, which has an 8000-meter elevation, without oxygen cylinders, to raise awareness about how glaciers are melting at a dangerously fast rate. If he achieves this, he will be youngest person in the world to do so, and we will be streaming it live.

How is climate change approached in your country? The good, the bad and the ugly.

I belong to a country that is surrounded by water on three sides. Due to a rise in sea level, there has been severe flooding during the monsoon season, which has affected the lives of farmers and also the lives of common people due to the hike in food prices.

As you can see, Sagar is a natural leader in the fight against climate change. His dedication to environmental education and empowerment is galvanizing the masses to get active and engaged—and it’s incredibly inspiring.

Want to learn about other eco-influencers who are inspiring climate action all over the globe? Check out our blog to meet our favorites and find out how you can be a part of the solution.