In a place where vegan meets luxury, a Dubai-based, supposed-to-be wealth manager began a journey as a conscious blogger and ecopreneur.

Shruti was raised in India in a family immersed in “hard core finance and accounting.” But instead of following that track, her passions for a cruelty-free lifestyle and fashion combined in a blog called @StyleDestino. 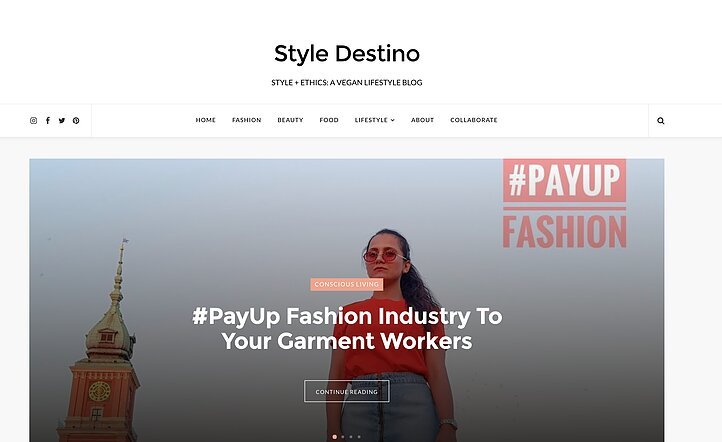 A life-long vegetarian, Shruti proudly says she now lives a completely vegan lifestyle. But this is just the starting line for what she is driven to accomplish. She is working to expand her content to include videos about living sustainably. And she maintains a platform called FAETH – I am the Change (@faethofficial) where she inspires personal action through festivals, workshops and talks on conscious living.

“Creating awareness and educating people about the power they have in their hands to bring a positive change is the only choice we have to save the planet,” she says. “Because (if we don’t), change won’t come.”

We asked Shruti what she thinks our biggest opportunity is to reverse climate change.

“We all know that climate change is happening,” she says. “The best way to reverse climate change is by creating awareness, and by holding companies and government accountable for their actions (and inactions). We need to (each) start making changes in our everyday lives, no matter how small it seems, because even a small action has a huge impact in the long run.”

Was there an event or cause that compelled her to fight climate change?

Shruti has been a vegetarian all her life, now vegan, and she follows the Jain lifestyle principles that believe in complete non-violence, minimalism and peace, “among people and within ourselves,” she adds.

“While I have been working towards infusing the cruelty-free and non-violence aspects of Jainism into my lifestyle (I am far from perfect), somehow for a long time I ignored minimalism,” she says.

“Thanks to social media, during my journey as a blogger, I got a deeper understanding of the problems of consumerism and the excessism it results in,” she explains. “I realized that most of the environmental issues we see today are linked to consumption – things like fast-fashion, ubiquitous plastic use and goods with built-in obsolescence.”

Shruti says this awareness helped make a transition in her own lifestyle. “Because unless we change, change won’t happen,” she says. “A single person can bring a huge impact when it comes to climate change. That’s how my journey started as an eco-warrior.”

What would Shruti do if she had a million dollars to donate to a cause?

While she chose to ignore her expected path in wealth management, Shruti says she still understands the importance of managing money properly.

“If I had a million dollars, my first step would be investing in a safer asset (like debt) and make sure I don’t spend everything at once and then have nothing left . . .,” she begins.

Then, from the investment, she would take out some small percent of the million dollars in tranches or portions to tick off this list:

#1. Set up a for-profit organization that creates awareness and educates people (adults and kids) about the need to live consciously by actively engaging them in activities and creating an army of eco-warriors.

“Think zero-waste sustainable farmer’s markets, eco-friendly festivals with markets, talks and workshops,” she explains. The profits generated from here will ensure we can continue to fight against climate change without running out of money or depending on others.”

#2. Set up a vegan cooking class and academy that would not just teach culinary skills, but make people aware about the benefits of going vegan for their health.

”We all know that meat and dairy production is responsible for more than 15% of global climate-changing emissions. Going vegan is one of the four biggest environmental contributions a single person can make.”

#3. Organize plantation camps (farm camps) for kids, because they are the only hope for the planet.

“If we create awareness among the kids from early on, connect them with nature and explain to them about climate change and its consequences, we have a better chance of saving our planet.”

#4. Fund start-ups that are passionately working on products and solutions to save the planet.

Finally, we asked Shruti this:

“I think it’s not about what aspect of climate change is not talked about enough but how (the topics) are addressed. We need to relate climate change to people’s daily lives,” she says.

“People care more about improving their own health and well-being than reducing carbon emissions. If you would say that energy efficiency improved by 30%, most people would yawn.” However, she adds, “if you would say the energy efficiency will save 3,000 lives this year by reducing air pollution, people are interested. It’s the same with consumerism, meat eating and other contributors of climate change.”

How is climate change approached in the United Arab Emirates?

In UAE, especially Dubai, there is a lot of buzz about sustainability. In the last few years, according to Shruti, the media has constantly run campaigns to create awareness about the dangers of using single-use plastics.

“The government and various local NGOs have launched several initiatives to fight against climate change, like shifting to clean energy, banning single-use plastics from airports,” she explains. “In fact, Dubai has its own Sustainability City, the first net zero energy development in the region, with its own solar park, running track made from recycled rubber tires, and biodome greenhouses that grow various vegetables, herbs and fruits, among other sustainable achievements.”

However, the moment you step in a supermarket, you see the use and abuse of plastic everywhere, says Shruti. “Even things like bananas and oranges are often found wrapped in plastic.

There is very little dialogue about reducing, recycling and reusing. The region is well known for all things in excess, including consumerism. This needs to change.”

Final words from this entrepreneurial eco-warrior?

“A lot needs to be done, and fast, when it comes to putting things in practice at the consumer level.”

To meet other young eco-warriors inspiring climate change activism around the world, check out more of our stories.