“Knowledge is power! We must stop the expansion of the fossil fuel industry in the world and accelerate the transition to fair and low impact energy!” 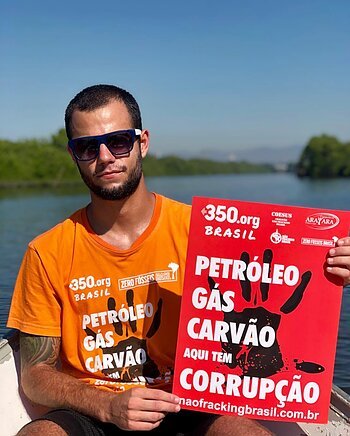 Ian Zugman is an environmental activist and organizer for the NGO 350.org Brazil. His mission is to fight the fossil fuel industry and its devastating effects on our global ecosystems. From exposés on the energy sector to protests against the Brazilian government, itself, Ilan is “applying pressure” to a broken system and holding its leaders accountable.

We spoke with the eco-warrior on what changes he’d like to see in Brazil in 2020. Here’s what he had to say:

1. Tell us about yourself, and what compelled you to fight climate change?

My name is Ilan Zugman. I am a 30-year-old environmental activist from Brazil.

I dream about the day when we can give nature as much as it gives us. I have been fighting climate change for more than five years, but the real starting point for me was during my master’s degree in Australia. There, I saw with my own eyes all of the coral bleaching that climate change was causing in the Great Barrier Reef. It was very sad to realize that future generations were not going to be able to see one of the most amazing ecosystems on Earth.

2. What aspect of climate change do you think isn’t talked about enough? 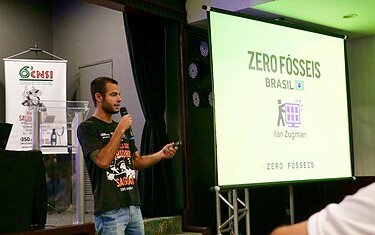 I think that we are failing to include two very important sides in the climate change debate: one is the perspective of regions that are already suffering from the impacts of climate change. The other is the point-of-view of the people who have a way better understanding of Mother Nature than we do. I am talking about indigenous people and all other traditional communities that live on this planet.

3. If you had a million dollars to donate to a cause, which would it be?

I would donate it to shark conservation. Sharks are my favorite animal on Earth, and, unfortunately, they’re always mistaken as killing beasts. Humans kill around 11,000 sharks per hour (mostly for fin soup), whereas sharks kill around six humans per year.

Sharks are so important to the balance of our planet. I want to share a cool thing about them that not many people are aware of: shark protection can reduce the impacts of climate change! A decline in the shark population allows their prey to become overabundant and eat carbon-storing vegetation (seagrasses, salt marshes, and mangroves) in larger quantities. This type of vegetation captures and stores carbon forty times more efficiently than tropical rainforests, such as the Amazon.

4. How is climate change approached in your country? The good, the bad and the ugly

In Brazil, as in most of the world, we used to have climate discussions (not much action though), and a government that believed climate change was real. With the new administration, which started in 2019, that posture has changed. Our current President does not believe in climate change and has the opinion that nature conservation and traditional communities are the biggest threat to progress in the world. So, for me, definitely the bad is Jair Bolsonaro, and the ugly Ricardo Salles (Minister of the Environment). 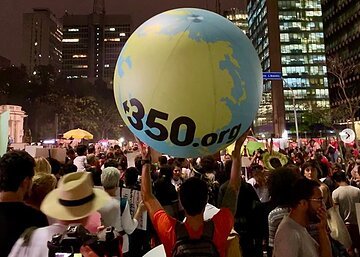 This year we had the biggest fires and highest deforestation rates in the Amazon (Bolsonaro blamed NGOs and Leonardo DiCaprio for it). We also had the biggest oil spill, which is still damaging almost half of the Brazilian coast, and the highest rate of climate defenders being killed (activists, indigenous, artisanal fishermen, etc.). The good is the great job the few NGOs, communities, movements, volunteers and groups are doing about the socio-environmental issues in our country. If it were not for them, the situation would be even worse.

Ian Zugman’s interview is the latest installment in a series documenting the most influential thought leaders in the global environmental movement. To meet more of our eco-warriors, click here.

Check out more awesome works from eco-influencers just like Ilan, around the globe! –Europe –Latin America