The world is trading the Rainforest for fast food and wildfire.

Brazil is home to more than half of the Amazon Rainforest and about a third of Earth’s plant and animal species. It’s the most important stronghold in the fight against climate change, but it’s been taken over by someone nicknamed “Captain Chainsaw;” someone who fired his chief scientist when presented with statistics showing that fires in the Amazon increased 88% this year; someone who bears a striking resemblance to another climate-denying authoritarian in the Americas– one who is also known for firing dissidents.

Trump of the Tropics

In the same way Trump has been accused of emboldening white nationalists with his rhetoric, Brazilian environmentalists blame Bolsonaro for motivating farmers to illegally clear land. The wildfires are no surprise considering that the far-right president has been adamant about opening the Amazon for business since he first took office this year. Now, business is booming, and just like Trump, Bolsonaro has no problem sacrificing ecology for the sake of economy. 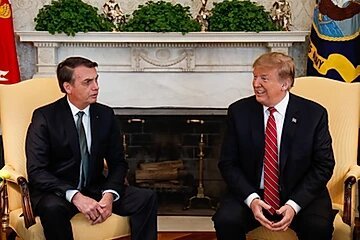 Trump and Bolsonaro are very public about their bromance and, recently, Trump hinted at lifting old trade restrictions for his new pal. Brazilian beef has been banned from America since 2017 for violating safety standards. But what about environmental standards? Environmental health is crucial to individual health, so if Americans care enough about their health to ban Brazilian beef, they should reject this new deal. However, Americans might not be able to stop the rest of the world from buying in.

We vote with our dollars, and internationally, we’ve voted Brazil as the top beef exporter. Now, thanks to Trump’s trade war with China, Brazil is also the top soybean supplier. China was already Brazil’s best beef customer, but when Trump raised tariffs on Chinese imports to the U.S. last year, China turned to Brazil for soybeans, too. Since then, China has imported over 71 million tons of soybeans from Brazil. That’s about as much as it imported from the entire world in 2014. 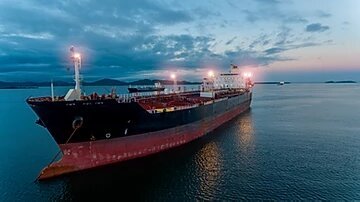 A cargo ship in the port waiting to be loaded already at nightfall, in the bay of Brazil in the state of Parana in Paranagua, the largest port in the south of the country.

Brazil’s customers are growing as fast as the beef demand in developing nations. Their exports to the United Arab Emirates rose 440% this year and they’ve recently gained access to Southeast Asian markets like Indonesia, who’s known for being one of the largest importers of cattle. On top of that, Brazil was about to close a deal with the EU granting access to European markets in exchange for auto-parts and alcohol– but that was before they saw the Amazon smoke rising.

Ireland was the first to push back when the fires began in Brazil, stating that they would block the EU trade deal unless Brazil took action. Irish Prime Minister, Leo Varadkar, pointed out the contradiction in making EU farmers limit pesticides and respect biodiversity while the government was making trade deals with countries without “decent environmental, labor and product standards.” He also added that Ireland plans to monitor Brazil’s environmental practices as the EU waits to vote on the deal in two years.

Ireland is known for its high standard of sustainability. Almost all of their beef is grass-fed and pasture-raised, which allows anyone to trace their meal from farm to fork. The cows spend their lives roaming the beautiful rolling hills of the Emerald Isle, some of the best pastures in the world.

Are you an omnivore that wants to protest Brazil? Buy Irish beef.

Most Irish beef is exported to other European countries, but there are currently six USDA-approved companies:

If you can’t buy Irish beef, there are other countries with sustainable farming practices who have also spoken out against Brazil, such as Finland and Australia. When all else fails, it’s best to follow this rule of thumb: avoid fast and frozen food, buy local. Fast food corporations like McDonald’s and supermarket conglomerates like Walmart depend on Brazil for cheap beef and soy. They’ve pledged to stop sourcing food from areas that exasperate deforestation, but they haven’t lived up to the promise.

Avoid these big chains all together if you can, for your own health, as well as the health of the planet. Of all the choices, the best bet is to buy local, which is healthier, more sustainable, and can be just as inexpensive.

Governments and corporations need to act as role models if we’re ever going to build a sustainable future, but we as consumers can only control our own actions. This means we need to lead by example. We can’t depend on leaders who tell us to rake more or poop less. Every purchase we make is a vote for the future.