Back in 2007, the iwi (extended kinship groups) of Ōhiwa Harbour in Aotearoa New Zealand’s Bay of Plenty were worried about their mussels. The chewy, salty green-lipped shellfish (Perna canaliculus) grow in ‘beds’ on seafloor reefs and are harvested by freedivers or picked at low tide if they sit shallow enough; they’ve been a critical local food source for generations. But locals had noticed that the mussels seemed to be declining: there weren’t nearly as many in the harbor as there used to be.

Kura Paul-Burke, a member of the local Ngāti Awa iwi, keen diver and current associate professor in marine science at the University of Waikato, was a second-year undergraduate student at the time – and a lifelong lover of the harbor she calls home. Alongside her American husband Joseph Burke, who is also a diver and marine researcher, she decided to investigate. 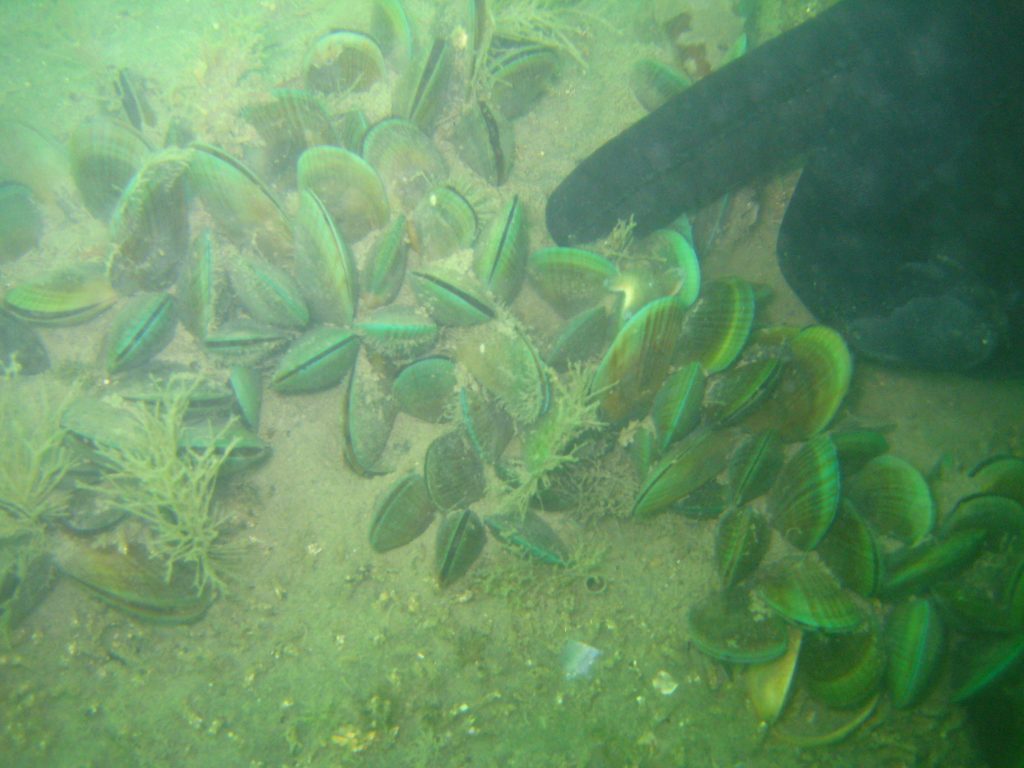 Green-lipped mussels on the sea floor

The couple’s approach, which employed both Western scientific methods and mātauranga Māori (knowledge originating from Māori ancestors), was unconventional at the time – although integration of the two epistemologies has become increasingly common in the country since then.

First, the couple took a group of local elders out on their boat in the harbor, and asked them to recall where and what size the mussel beds used to be, when they’d dived or foraged for them in their youth.

“So they talked and they substantiated, they backed each other up or disagreed or agreed on places, and they described the traditional landmarks and tohu [environmental indicators] as to when and how to harvest,” said Paul-Burke. “And that gave us all this intergenerational knowledge; it gave us a timeline, 60 years back from today. And we used that as the baseline.”

Next, she and her husband pulled on wetsuits and scuba gear, and dove down to explore the sites the elders had mentioned. “And it was astounding how incredibly spot-on they were,” she said.

Many of the elders hadn’t dived for three decades or more, and yet their landmarks and environmental cues corresponded extremely accurately to the locations of the harbor’s four traditional beds. Paul-Burke and Burke mapped the beds’ size, shape and estimated number of mussels and, in collaboration with iwi and local councils, began monitoring them over time. Their concerns were confirmed: the mussel beds were declining rapidly, and by 2019 there was only one bed left. 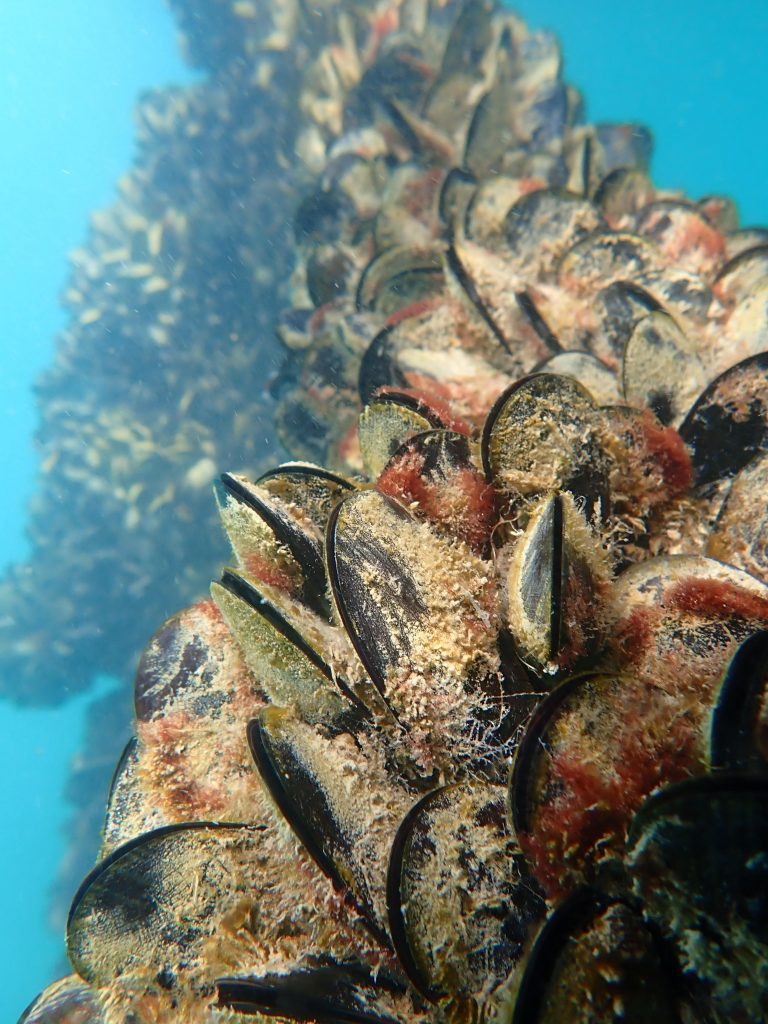 Natural resource line with mussels growing on it

Why was this happening? The researchers ruled out human overharvesting, because iwi had had a rahui (harvesting ban) in place in the area for a number of years, and it had been well-observed and enforced. Then, on another dive trip, they realized that populations of the bright-orange eleven-armed starfish (Coscinasterias calamaria) were proliferating in the harbor. These starfish are voracious predators of shellfish – particularly juvenile mussels.

On that same dive trip, Paul-Burke and her husband realized another thing: while few juvenile mussels were surviving on the seafloor, the mooring chains of the harbor’s boats were all thick with mussels. “And that got us thinking that maybe our harbor can grow its own mussels,” said Paul-Burke. In further discussions with iwi and local councils, they decided to establish ‘restoration stations’ to help rebuild Ōhiwa’s mussel populations.

“We used the concept of whakapapa (genealogy),” said Paul-Burke. “If you’re going to restore anything, you’ve got to make sure you can grow babies, because if you can’t reproduce, something’s wrong.” Initially, they used industry ‘spat lines’ – floating plastic ropes onto which mussel larvae (‘spat’) attach themselves, which keep the juveniles out of reach of the predatory starfish until they are bigger and more resilient.

The lines worked well, but Paul-Burke felt uncomfortable about putting yet another plastic product into the ocean in the name of restoration, and she began reaching out to iwi for alternatives. She started working with a local weaving expert, Rokahiria Ngarimu-Cameron, to develop lines out of harakeke (flax, Phormium tenax), tī kōuka (cabbage tree, Cordyline australis) and kiekie (Freycinetia banksii) – all of which are abundant, fast-growing native plants that Māori have used traditionally to create mats, bags, clothing, ropes and lines. Cameron teaches in the toi paematua (indigenous art) program at Māori tertiary institution Te Wānanga o Aotearoa, and has engaged her students there in making more lines as part of their raranga (weaving) study.

In 2020, the team took sustainability to the next level. During the country’s first COVID-19 lockdown from March to May, Paul-Burke was walking through a local wetland, and she noticed people cycling over tĪ kōuka leaves that had fallen to the ground. Raking up tī kōuka from lawns and parklands is a familiar practice across Aotearoa New Zealand, as the trees shed multitudes of tough, fibrous leaves, which tend to tangle and ruin lawn mower blades.

“So I started thinking, well at the moment we’re harvesting living material to put into the harbor – what if we used biowaste instead?” said Paul-Burke. “And so that’s what we’ve done for our next generation – we use tī kōuka biowaste to weave our lines. We’ve put them in the water now and so far they’ve been really, really good.”

Mussel populations in the harbor are now rebounding rapidly. The one remaining traditional bed, which sits near one of the team’s restoration stations, had just 80,000 mussels when the researchers dove there in 2019; now, it’s home to over 260,000 mussels. This year, the group received funding from the Sustainable Seas National Science Challenge, a governmental innovation fund, to begin a new four-year trial in collaboration with the University of Waikato to explore why there are so many sea-stars in Ōhiwa Harbour at present, and what the options might be for managing the population more effectively and sustainably.

Paul-Burke believes that the natural resource lines offer advantages for the mussel populations that reach beyond their renewability and non-polluting nature. In a natural setting, mussels seed and grow in clumps on the seabed, whereas when they grow on industry lines they are pulled off individually and thrown overboard, where they tend to be swept away by currents and separated from each other.

“So with our natural resource lines, the mussels grow on the lines as a whanau [family],” said Paul-Burke. “And when the line biodegrades [which takes around three to six months], their combined weight helps them to drop, so they fall to the bottom as a whanau, and then they reattach as a whanau, too.”

The symbolism is compelling. Colonization has splintered so many Māori whānau and iwi from their interconnections and ancestral ties, and Western science has often been guilty of looking at individual pieces of our world in isolation, sometimes to the detriment of seeing the bigger picture and the relationships within it. Projects like Paul-Burke’s buck that trend, connecting diverse communities around common ecosystems and concerns, and weaving together cutting-edge science and ancient practices to help create the integrated and sustainable sea-scapes of the future.