Creatures From the Deep Sea That Will Absolutely Give You Nightmares

The deep sea might as well be an entirely different planet. Located far below the oceanic twilight zone, the deep sea exists in the midnight zone—a place that’s too far removed for sunlight to reach. Down here, it’s eerily quiet and still, because it’s too deep to be affected by storms or ocean currents. It’s also another world because of the jaw-droppingly strange and downright monstrous-looking creatures that lurk in these dark, cold depths. Keep reading, if you dare, to see some of the horrors that are living thousands of feet below the water’s surface. 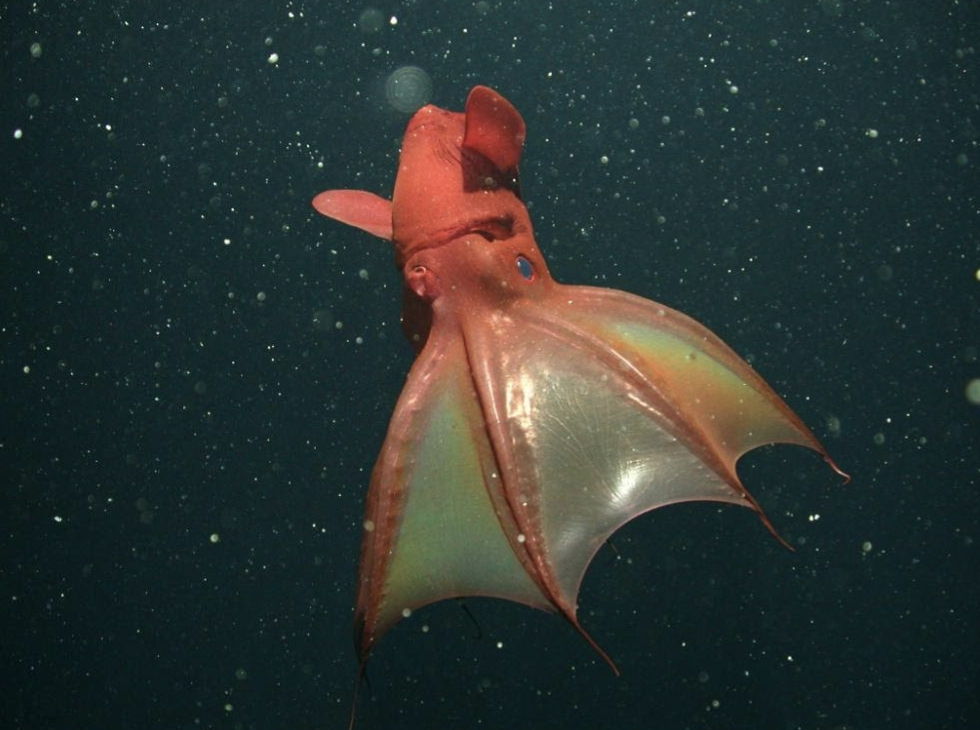 It’s not just the scarlet coloring that gives this spooky undersea dweller its name. The Vampire Squid’s eight arms are connected with a cloak-like webbing of skin that’s eerily reminiscent of a bat! It also has glowing, bioluminescent eyes, which bring to mind visions of a fanged Dracula. If that’s not scary enough, consider this: its scientific name, Vampyroteuthis infernalis, literally translates to “vampire squid from hell.” 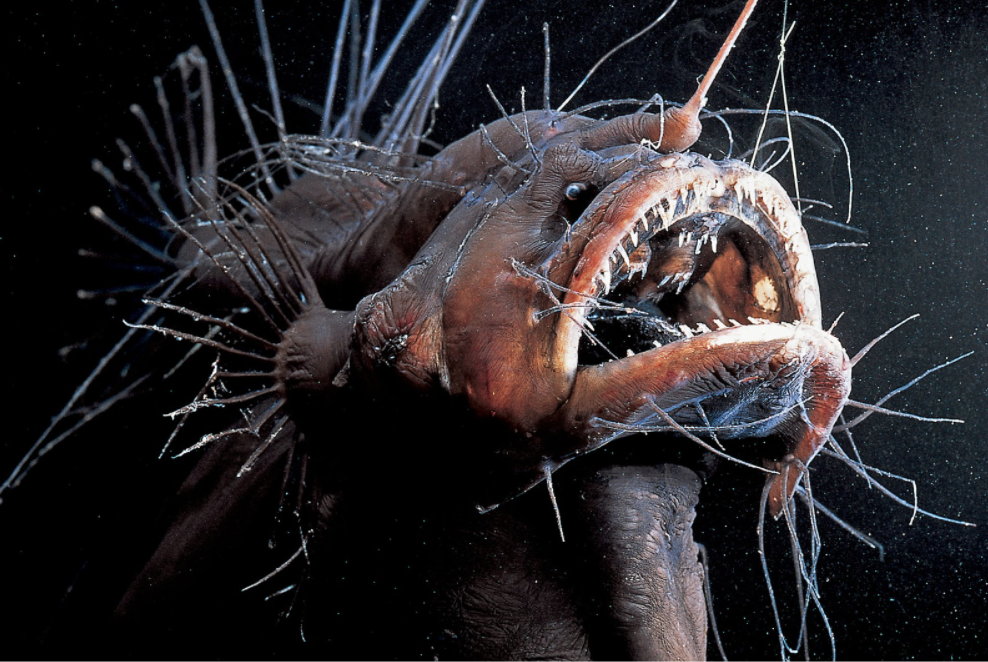 This fish is truly the stuff nightmares are made of. In addition to its spiky teeth, the Anglerfish also has a bioluminescent ‘fishing pole’ that hangs before its face, a dorsal spine packed with millions of light-producing bacteria. The Anglerfish uses this glow-in-the-dark lure to attract fish, then gobbles them up before they have a chance to escape. Even more terrifying about this fish is its mating ritual. The male Anglerfish fuses itself to the female, where his body parts begin to disintegrate. He remains there, a small lump of flesh hanging from the female and waiting until she’s ready to spawn.

Although scientists have known about this midnight-zone species for nearly a hundred years, it wasn’t photographed until 2004. The Barreleye fish has a transparent head, which means many of its organs are visible to the naked eye. This futuristic looking creature also has tubular eyes located on the top of its domed head, which helps it catch sight of prey or predators in many different directions— including above it, since it can see straight through its own head!

The creepiest part about the Northern Stargazer is how it can burrow itself into the sand—with just its eyes and mouth sticking out—in a matter of seconds. It camouflages itself this way so as not to be noticed by unsuspecting prey. This sneaky fish has an organ on its head that delivers an electric shock, which it uses to stun prey, before using its large mouth to vacuum them into its mouth. 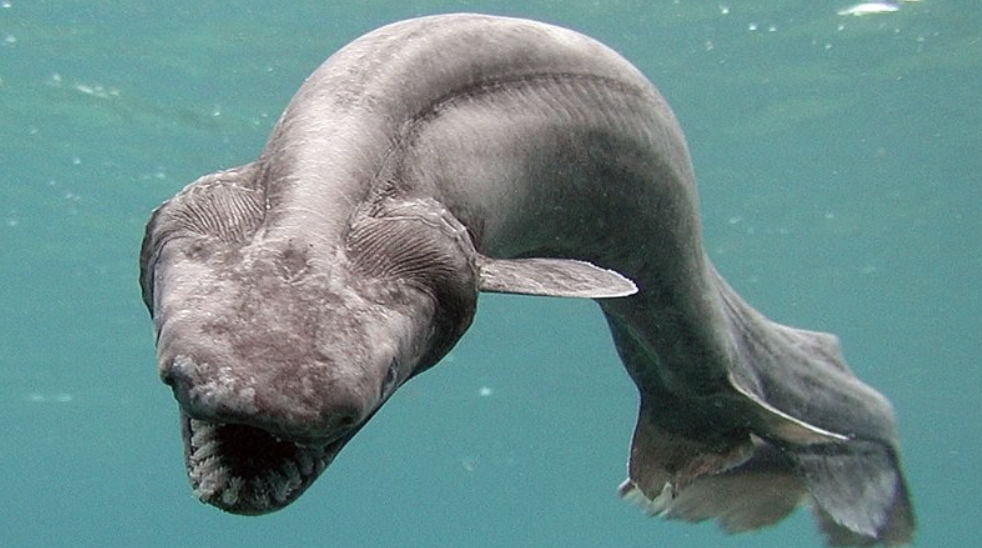 At first glance, this freaky looking creature looks like it swam off the set of the movie Alien. In fact, Frilled Sharks are referred to as a “living fossil” because in the 80 million years they’ve lived on Earth, their prehistoric features have rarely changed. If that wasn’t enough already, the jaws of a frilled shark are lined with 25 rows of backward-facing teeth, for a grand total of 300 razor-sharp teeth in all. 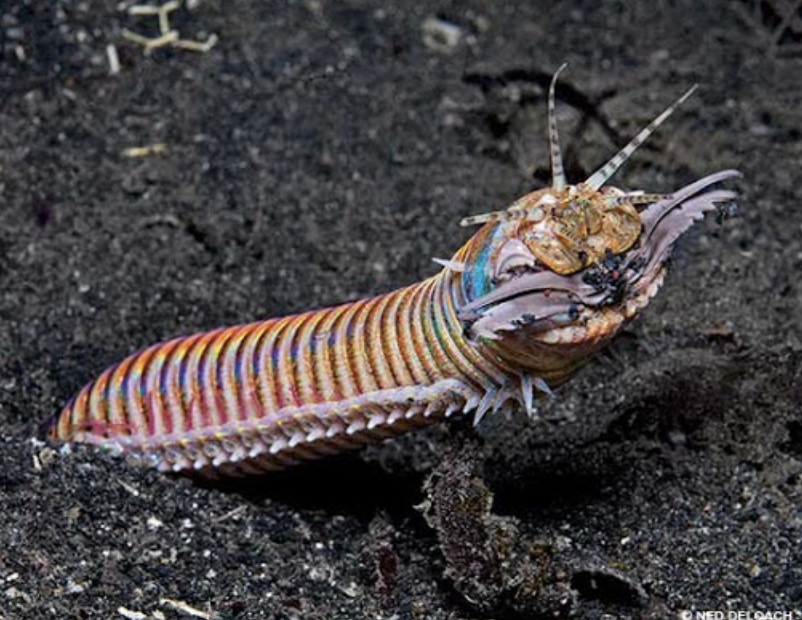 The Bobbit Worm, also known as a sand striker, is one of the most nightmarish creatures in all of the deep sea. Just a few inches wide, this worm digs itself into the sea floor, staying hidden in the sand and lying in wait for its next meal. As unsuspecting prey swim closer, they don’t realize that although the Bobbit Worm’s body is only a couple of inches wide, it measures a whopping ten feet long underneath the sand. The sand striker lashes out and grabs its prey with such speed and force that it can split a fish—or even an octopus!—into pieces before dragging it under the seafloor, never to be seen again.

Want to Join the Crusade to Save Our Planet’s Oceans?

The most mind-blowing part of it all is that more than 80% of our oceans are still unexplored by scientists—which means there are tons more of these magnificently creepy creatures still yet to be discovered. That’s why it’s so critical that we protect our ocean floors, which serve as a home to innumerable ecosystems that help support our own life here on land. Want to help fight the industries who seek to exploit our ocean’s natural resources? Sign up here to learn more about seabed mining updates and help ensure a safer future for our planet’s oceans.