15 Mind-Blowing Inventions That Could Save the Planet Cemeteries are a grave business—and not just because of what lies six feet under.

Each year, 4 million acres of hardwood forest are cut down to construct wood for caskets, and cemetery lawns are then continually watered and synthetically fertilized. But two Italian artists are rethinking the way we do our burials—and it’s actually quite beautiful. The Capsule Mundi is a biodegradable burial pod that allows your body to become the ‘seed’ of a new tree when you die. Not only does your death create new life, but the tree serves as a living memorial to your life as well— it’s a much more beautiful tribute than a concrete slab. Even when we’re high up in the sky, we humans still find a way to generate unnecessary waste. In fact, passenger flights accumulate 5.7 million tons of garbage per year, between one-time-use plastics, food waste, and more. That’s why the eco-friendly flight meal trays from design studio PriestmanGoode are such a blessing for the aviation industry—and our collective carbon footprint. The trays are biodegradable, plastic-free, commercially compostable, and even feature edible packaging, such as reusable dishes made from wheat bran, lids made from banana leaves, and utensils made from coconut wood. Cambridge University researchers discovered that moth larvae can chew through plastic. It’s a breakthrough discovery because plastic waste makes up around 40% of the world’s ocean surfaces. It also endangers marine life—including fish, sea birds, sea turtles, whales, dolphins, and seals—who are injured or killed after accidentally consuming or becoming trapped in plastic. Although they’re tiny, these little superheroes are equipped with bio-degrading powers that could be key in helping reduce plastic waste—an ecological must for saving our oceans. Hate that squeaky, nails-on-a-chalkboard sound styrofoam makes? Well, turns out the much-hated material is just as bad for the environment as it is for our ears. Styrofoam is really just Dow Chemical’s trademarked name for extruded polystyrene – a foam that contributes to greenhouse gases, doesn’t degrade for hundreds of years, and can potentially kill turtles, fish, and other creatures, who mistake it for food. Thankfully, you can continue to keep your drinks cold while also being good to the environment. Igloo has created a biodegradable cooler made from paraffin wax and recycled paper called RECOOL. Because it’s water resistant, it can be reused many times, and once it’s no longer usable, it can be composted, recycled, or used for dry storage. Why buy traditional leather when you can choose cruelty-free leather that lasts just as long? Two business owners from Mexico launched Desserto, the first vegan leather made from nopal (prickly pear) cactus. The sustainable alternative to traditional leather is free of the toxic chemicals and phthalates that pollute our oceans after entering waterways. Plus, the cactus-leaf-turned-leather is flexible, breathable, and will last for ten years or more, making it just as durable as traditional leather—and much better for the environment. Poland is no stranger to bike-friendly cities—and with solar-powered glow-in-the-dark bike lanes, their cities could become even safer for cyclists at night. Created by a Pruszków research institute, these luminous cycling strips are made from blue luminophores, a synthetic material that emits light after being charged by the sun. The solar-powered strips beam light for ten hours at a time—which means they glow all night without needing an additional power supply. 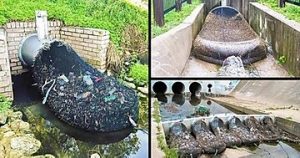 Kwinana, Australia has introduced a simple yet genius way of combatting water pollution. Nets placed around storm water drainage pipes act as traps for trash and plastic, catching it before it makes its way to the city’s waterways. Once full, the nets are driven to a waste management facility, where they’re separated into recyclable and non-recyclable materials. Within the first three months, the nets caught a whopping 815 pounds of garbage. Because polluted waterways are dangerous for humans and wildlife, and have long-lasting effects on the environment, we hope more cities will get on board with this simple yet powerful solution to pollution! Move over glass chandeliers. One UK engineer and biotechnologist has created the blueprint for environmental elegance with a lighting design that is both beautiful and eco-friendly. The living chandelier is made with algae-filled leaves, which purify the air by absorbing carbon dioxide and releasing oxygen. While this chandelier is still in a prototype phase, the designer is working hard to apply the concept of photosynthesis to larger buildings, giving them the opportunity to shrink their carbon footprints, too. The future of footwear is here, and it has a name—the Adidas Futurecraft Loop. In 2015, the sportswear giant partnered with the environmental organization Parley for the Oceans to turn marine pollution into footwear with these 100% recyclable shoes. Once worn out, you can return your sneakers to Adidas, who will reuse their materials to manufacture new one. Their goal is to make 11 million pairs of shoes with recycled ocean plastic—and considering that the clothing industry is the second-largest polluter in the world, this is a giant step toward sustainable fashion. RV company Dethleffs has found a way to make your next road trip cheaper and safer for the environment. Their solar-powered RV harnesses the power of the sun for energy, which means no fuel or charging station is necessary to get you where you need to go. The 3,000 watts of energy last for 100 miles, at which point you both get to stop and soak up some sun before setting out for more adventure.

One Italian architect and urban planner is paving paradise for a parking lot. He’s the designer of global vertical forests — buildings covered with pollution-absorbing trees and plants. His latest project is based in the Egyptian desert, and it’s the first vertical forest on the African continent. The trees, plants, and shrubs on the building’s terraces absorb harmful carbon dioxide and produce more oxygen, while also creating habitats for birds and insects.

12. A Concept for Removing Ocean Plastics 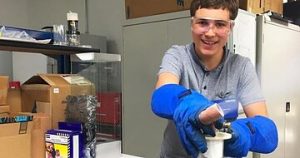 Greta Thunberg isn’t the only teenager whose environmental activism is helping lead the way for climate justice action. Fionn Ferreira, an 18-year-old from Ireland, won the 2019 Google Science Fair grand prize for his project, which aims to remove microplastics from our oceans. His innovative method uses ferrofluid – a magnetic liquid that attracts plastic particles by removing them from water. After close to one thousand tests, his method successfully removed nearly 88% of the microplastics from the water samples. Fionn plans to apply his design towards larger bodies of water in the future, in order to help remove microplastics in our oceans worldwide.

13. Plastic-Made Roads That Last 10x as Long as Asphalt 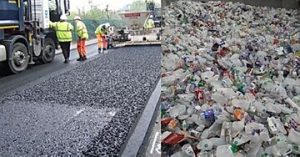 Why send more plastic to the landfills when you can pave new roads with it instead? That’s exactly what UK-based company MacRebur is doing. Their renewable asphalt—a mix of industrial and consumer plastic waste—replaces the oil-based sealing material that holds asphalt together in roads. The result? A newly improved asphalt that’s 60% stronger, more durable, and—most importantly—eco-friendly. 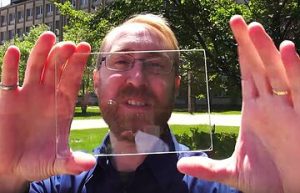 Researchers at Michigan State University have designed a technology called a transparent luminescent solar concentrator, which could revolutionize the future of green energy. Transparent materials are inherently incapable of producing energy, since light passes through them, rather than being absorbed. And that’s why traditional solar panels are black and roof-mounted, in order to accommodate the bulky weight. However, the MSU researchers have created see-through solar materials that can be applied to any window or sheet of glass. This enormous source of previously untapped energy holds the power to drastically reduce fossil fuel dependence for new construction, making solar cities and transportation a very real possibility in the near future. 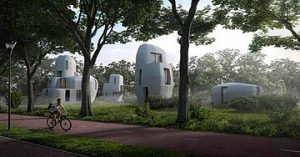 Hemp is a naturally beneficial material for manufacturing rope, clothing, textiles, paper, and insulation—but that’s not all it’s good for. An Australian biotech company has shared its plans for a line of 3D-printed homes made from the cannabis plant material. The plans include floors, walls, and roofs made from hemp biomass, in addition to transparent solar materials that will allow sunlight to pass through windows, while also converting it to energy. As more builders and architects incorporate sustainable materials like hemp, we move toward a homebuilding industry—and future—that’s more energy-efficient than we thought possible.

Looking for more ways to live a low-impact lifestyle? Check out our blog for tips on how to make packing for your next trip environmentally friendly, no matter where you travel!