The State of Deep-Sea Mining in the Philippines

Like most countries in Southeast Asia, the Philippines is home to a myriad of natural resources. From timber, petroleum and salt to copper, nickel, silver and gold — the richness you can get from the Philippine Islands and its extensive beaches are endless.

All of these resources, in addition to the lenient regulations regarding their extraction and collection, have attracted a variety of activities. While many of these projects were able to provide job opportunities to hundreds of Filipinos, it couldn’t be denied that they were (and still are) ruining and exploiting the country’s ecosystem in more ways than one. A great example of such an activity is mining. According to the Philippine Statistics Authority’s data, there were over 219 establishments “engaged in mining and quarrying in the formal sector of the economy.” Trading Economics noted how, as a collection, these establishments contributed over PHP 42.9 million or USD 890 million to the country’s overall GDP for the second quarter of 2020. Unfortunately, the Philippine GDP is not the only thing they are contributing to.

In a recent article written by Sarah Bear, she mentioned how the years of mining have led to massive deforestation and the pollution of numerous bodies of water. Compared to other forested areas, those that are near heavily mined areas were found to have fewer tree species and are more prone to exotic invasion. In Mindanao, one of the largest artisanal gold mining centers has uncontrollably polluted the Naboc River, a river that flows into ponds and rice paddies, with mercury and a variety of sediments. These past few years, one of the most talked-about impacts of mining is the degradation of ancestral lands, as well as the displacement and killing of indigenous communities. In fact, environmental watchdog Global Witness declared that the Philippines was the deadliest country for land and environmental defenders in 2018. 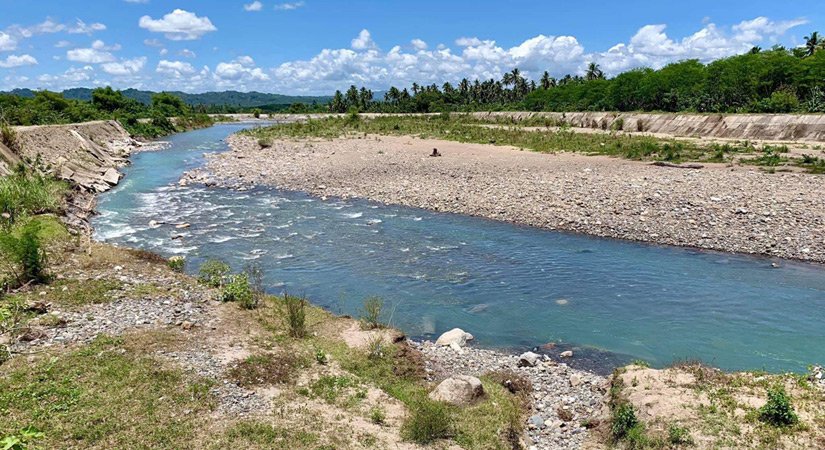 Naboc River is a channel for effluents of mining activities

In the face of all these detrimental effects, one would think the Philippine government would better regulate mining activities — or at the very least, reinforce the regulations they have in place to better safeguard the environment and its people. However, they seem to be doing quite the opposite, as there has been a growing interest in deep-sea mining. Recently, the Philippine Department of Environment and Natural Resources (DENR) introduced an ambitious offshore mineral exploration project in the Celebes Sea and Philippine Rise. The government is set to spend at least PHP 500 million or USD 10 million on the acquisition of relevant equipment for deep-water mineral exploration and on the repair of DENR’s research vessel from 2017 to 2020.

The Geologic Mapping–Coastal and Offshore Geological Studies and Mineral Exploration project aims to determine the deep-sea areas with mineral deposits like gold, platinum, titanium, iron, scandium, ferromanganese nodules and other rare earth minerals. The project is also looking into exploring the Philippine Deep for deuterium and hydrogen in the hopes of having new sources of fuel in case the country’s current sources are depleted.

However, right from the introduction of the project, environmental groups like Oceana Philippines have already voiced their opposition against the plan — and they have all the reasons to do so. Deep-sea mining will not only disturb the rich and highly diverse marine and coral ecosystem that the country has but also could create seafloor sediment plumes and release toxic vapors into the water. Greenpeace also noted some of the negative implications of such activity, which can include the extinction of creatures found nowhere else on the planet, the disturbance of one of the most important natural features that slow climate change and store “blue carbon the disruption of t,”he ocean food chain and the destruction of wonders that we are yet to discover and properly understand.

Although deep-sea mining is still yet to take root in the Pearl of the Orient, these disastrous effects are enough reasons for the government to take action as early as now. As some of the Philippine environmental groups said, instead of introducing new projects that could further exacerbate the existing ocean problems such as ‘The Global Plastic Pollution’, the Philippine administration should focus on initiatives that will promote biodiversity protection.

One of the most recent efforts the national government has made in order to protect the environment is the Boracay Rehabilitation. Back in 2018, President Rodrigo Duterte ordered the temporary closure of Boracay, a famous tourist destination located in Western Visayas. During the rehabilitation period, a variety of institutions worked hand-in-hand in initiating extensive cleanup drives and in calling out establishments that have been illegally dumping waste into the ocean.

Aside from such initiatives, it would also be in the best interest of the government to further strengthen existing environmental laws regarding mining regulations. The only laws that are focused on protecting the environment are Executive Order No. 9 (Institutionalizing And Implementing Reforms In The Philippine Mining Sector Providing Policies And Guidelines To Ensure Environmental Protection And Responsible Mining In The Utilization Of Mineral Resources) and The Indigenous Peoples Rights Act of 1997. However, these laws are often overlooked because most mining operations in the country, regardless of how destructive they might be, are backed by the national government.

In addition to mining laws, it would also be a good idea for NGOs and relevant government agencies to review and revamp the existing laws related to marine life preservation, before they even think about getting into deep-sea mining. After all, these laws are implemented in order to conserve the country’s coral biodiversity, limit marine pollution and ensure that the natural biological and physical diversities of the environment are protected and maintained.

If deep-sea mining activities in the country were to gain traction in the coming years and mining regulations were to stay the same, the only thing the Filipino people could expect is the rapid destruction of all the marine life surrounding the country as well as hard to solve problems like food shortage.