The Blue-Green Bacteria that Gave Us Breath 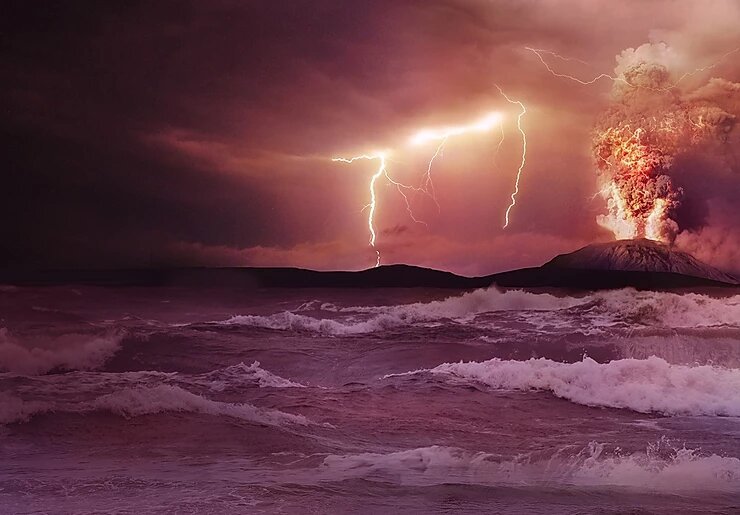 We owe our every breath to a miracle that occurred over 2 billion years ago.

In the preceding period, known as the Archean Eon, only 2-3% of land was above water; the atmosphere was dense with CO2 and void of free oxygen. This was ideal for the anaerobic organisms that once thrived but toxic to the complex life-forms that exist today. Then, amidst the primordial soup of ancient Earth, a small species of phytoplankton triggered one of the most important phenomena in our planet’s history: The Great Oxygenation Event (GOE).

These organisms, called cyanobacteria, acquired the ability to use sunlight to convert CO2 into food, releasing oxygen as waste. They were the first to use photosynthesis and aerobic respiration. Thanks to them, oxygen slowly made its way into the atmosphere, though it took 200 million years.

At first, the abundant iron in the ocean absorbed the oxygen, turning the planet rust red until it resembled modern-day Mars. The chemical reaction left banded iron formations in the sea floor, preserving it for future scientists to discover. When no more iron remained, the oxygen floated above sea level and built up in the atmosphere. Finally, around 2.3 billion years ago, atmospheric oxygen gained momentum, and the GEO began.

During this period, rising oxygen levels altered the Earth dramatically. Many organisms died, poisoned by the heightened levels, and CO2 production declined. Methane in the atmosphere combusted in reaction to the flood of new molecules. With the decline of these two significant greenhouse gases came the onset of the longest ice age, the Huronian Glaciation, as well as the first mass extinction. In the aftermath, the life that remained inherited a world so abundant with oxygen that it formed a layer of ozone, serving as a shield against harmful UV radiation. The surviving cyanobacteria evolved into plant life, which made existence possible for insects, animals, and humans.

Scientists continue to discover new insights into the factors that spurred the GEO, and geological phenomenon such as supercontinent crashes and volcanic eruptions may have contributed to this substantial planetary shift. Nevertheless, oxygen wouldn’t have reached critical mass without cyanobacteria. Over the last 2 billion years, these mighty little creatures have produced most of the oxygen in the atmosphere, and they are responsible for half of the air we breathe today.

So, take a breath, but don’t take it for granted. Phytoplankton fight every day to keep the climate from reverting into an inhospitable wasteland– and they are suffering under the weight of that burden. This time, we can help them win the battle. Visit our site to learn more about how vulnerable phytoplankton have become, and the important part they play in maintaining environmental equilibrium. Our blue-green ancestors gave us life; let’s return the favor.