New data-driven tool prevents collisions off the coast of California

Bigger than dinosaurs and heavier than 20 elephants, blue whales are the largest animals to have ever lived on Earth. Measuring up to 90 feet long and weighing as much as 160 tons, these colossal marine mammals maintain their giant body mass by consuming up to 12,000 pounds of krill daily.

However, as whales’ migratory routes have become progressively saturated with shipping traffic, fatal whale-ship collisions have increased. In Southern California, some 4,000 international cargo ships pass through the Santa Barbara Channel each year on their way to the two busiest ports in North America – Los Angeles and Long Beach. The Channel is also an important feeding ground for several species of whales, and the risk of ship strikes is high. In 2018 and 2019, 27 whale-ship collisions were recorded off the coast of California, 21 of which were fatal. 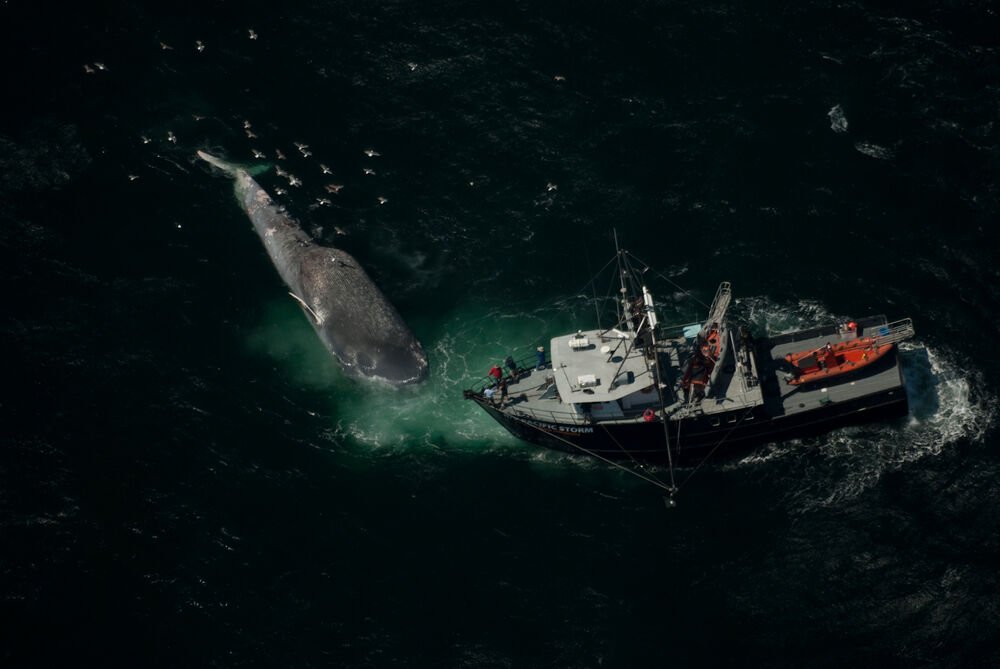 “In 2019, there were 13 recorded ship strikes [off the coast of California], but the number could be closer to 130,” said Morgan Visalli, a scientist with the Benioff Ocean Initiative at the University of California Santa Barbara.

In collaboration with researchers across the United States, the Benioff Ocean Initiative has developed a powerful tool aimed at preventing fatal whale-ship collisions. Whale Safe, launched in September 2020, is a mapping and analysis tool that provides near-real-time data on whale and ship activity. This information helps mariners to take precautionary measures, such as reducing their speed.

Visalli, who is also the Whale Safe project lead, said: “Studies have shown that when slow speed zones are implemented and followed, they can reduce fatal ship strikes by 80-90 percent.”

Initially deployed in the Santa Barbara Channel, the tool is currently focused on three species – the threatened or endangered humpback, fin and blue whales. Other whale monitoring tools exist, but Whale Safe is the only one that integrates data from three sources – a predictive model, an acoustic monitoring system, and whale sightings.

To build the predictive model, Briana Abrahms, assistant professor at the University of Washington, and her team used satellite tracking data from 104 tagged blue whales that showed where the animals went as they migrated up and down the coast. This information was then cross-referenced with data from a new 3D oceanographic model, recently developed by the University of California Santa Cruz, in collaboration with other institutions.

Abrahms told The Oxygen Project that the 3D oceanographic model has been critical as “it paints a clear picture of what the ocean is doing every single day.” It has enabled her team to comprehensively understand daily oceanographic conditions and the ocean habitats the animals are using.

Blue whales prefer temperatures from 15 to 20 degrees Celsius, which are “not too hot and not too cold,” explained Abrahms. Bathymetric features are also important. Krill, for example, concentrate around rugged areas, such as canyons, which provide better foraging habitats for whales. By combining the two data sets and validating their predictions with independent sightings, Abrahms and her colleagues can make daily forecasts about where blue whales are most likely to be on any day of the year. “It’s like a daily weather forecast for whales,” said Abrahms.

The second source of data used for Whale Safe is an acoustic monitoring system. Integrated into a moored buoy and attached to a hydrophone (an underwater microphone), the system uses detection software to automatically identify whale sounds in near real-time.

Acoustic detection system developed by scientists at Woods Hole Oceanographic Institution and Texas A&M University at Galveston was deployed in the Santa Barbara Channel near the shipping lanes in 2019. Credit: Benioff Ocean Initiative

Developed by Mark Baumgartner, a senior scientist at Woods Hole Oceanographic Institution, the software creates a spectrogram, a visual representation of the audio, with whale sounds represented by lines called pitch tracks. Sent ashore via a satellite transmitter, the pitch tracks are then reviewed by scientists from Texas A&M University at Galveston.

The final data source comes from National Oceanic and Atmospheric Administration (NOAA) surveyors who conduct monthly aerial surveys and from observers on whale-watching boats. Using the mobile apps Whale Alert and Spotter Pro, they record the number of whales observed, the species, time of sighting and the location. The three data streams are integrated into the online Whale Safe platform, which provides a daily whale presence rating – low, medium, high and very high – an interactive map and information about recent sightings. Using Automatic Identification System (AIS) data to monitor a ship’s speed, Whale Safe also produces “report cards” for companies and individual vessels showing how often they are slowing to the voluntary speed limit. In 2007, NOAA and partners implemented voluntary vessel speed reduction (VSR) zones, encouraging vessels traveling in or near the Channel Islands Marine Sanctuary to reduce their speed to a maximum of 10 knots. While speed reduction is voluntary, Visalli is hopeful that Whale Safe will enable mariners to make better data-driven decisions. 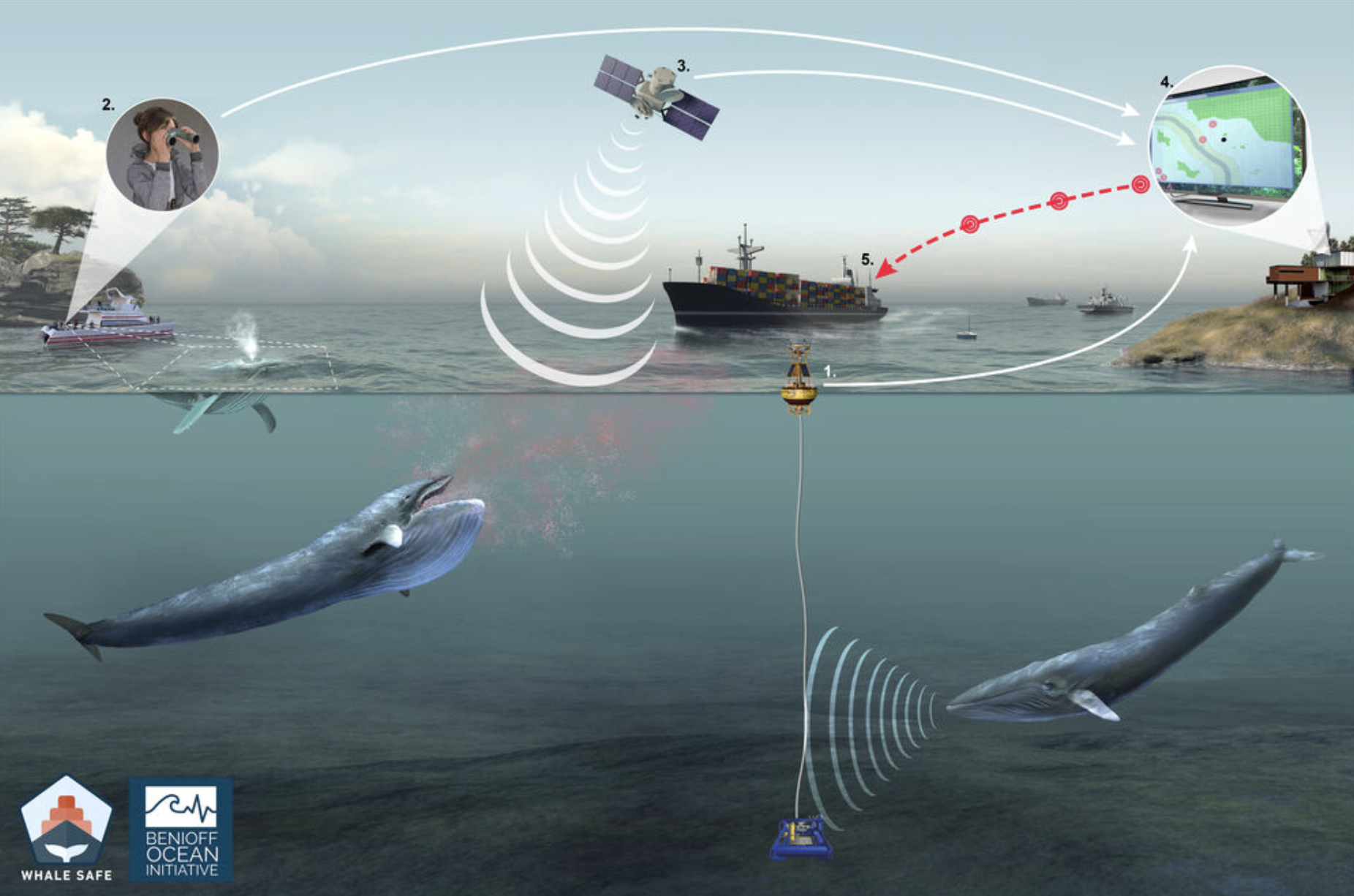 Acoustic monitoring instruments identify blue, humpback, and fin whale vocalizations. 2. Observers record whale sightings aboard whale watch and tourism boats with a mobile app. 3. Oceanographic data is used to predict where blue whales are likely to be each day, like weather forecasting for whales. 4. The three near real-time whale data streams are compiled and validated and 5. Whale information is disseminated to industry, managers, and the public. Credit: Nicolle R. Fuller, Sayo Studio

“Part of the challenge is that if mariners are going to slow down, they want to be sure that there are whales in the region, so I’m hoping that having this data will help reinforce the voluntary slow speed zones,” Visalli said.

Visalli also explained that the tool was, in part, developed in response to a government-led working group created to develop solutions to whale-ship collisions. Participating stakeholders from the shipping industry supported calls for new technological solutions.

The response to Whale Safe from the shipping industry has been positive. Visalli said that they are presently working with several companies that are interested in integrating Whale Safe data with software systems used for communicating with vessels.

“I am excited to have this back and forth so that we can tweak [Whale Safe] to better meet the needs [of the shipping industry] as they arise,” Visalli added.