The Next Climate Disaster Nobody’s Talking About

You may swim or surf or dive in the ocean, or simply enjoy its transfixing melodic waves from the beach. Consider this: it took tens of thousands of years to create that ocean basin you’re enjoying, with some deep sea floors estimated to be nearly as old as the Earth itself.

Fast forward 3-4 billion years, to today. A number of nations and commercial interests, even the International Seabed Authority (ISA) charged with protecting it, could allow rare mineral mining of the deep sea – with its devastating damage to the ocean floor, its inhabitants, and the Earth’s oxygen cycle – as early as this year.

It may be out of sight, loosely defined as below 200 metres (about 650 feet), but the deep sea cannot be out of mind. There is too much at stake, according to scientists and environmentalists.

“With the climate crisis we’re living in, we’re already fighting up hill. We have no hope of achieving our environmental goals if we don’t stop a potentially imminent move to allow deep sea mining,” according to Vasser Seydel, a 20-something environmental activist who comes from a long family tradition of environmental protection, including The Oxygen Project founder Rutherford Seydel. 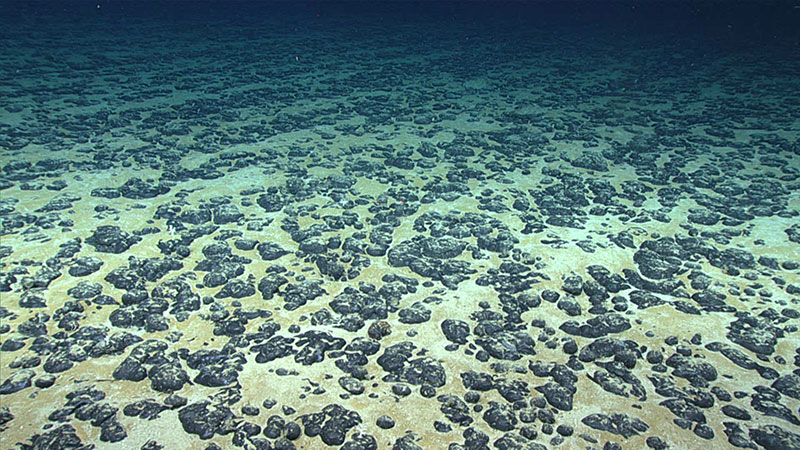 Manganese nodules found on the seafloor during a NOAA expedition.

Until the late 19th century, the deep ocean’s dark, frigid characteristics were assumed to be too severe for life to survive there, so it remained largely unexplored. Today, scientists say we still know more about our moon and outer space than we do about our oceans.

While awareness of ocean plastic pollution has risen to impressive heights, the issue of deep ocean mining remains buried in a sea of governmental and corporate hide and seek. To-be mining corporations (i.e., big oil) spend millions on “clean energy” advertising, while global leaders positioned for potentially huge economic benefits meet in closed door sessions of the international ocean “regulator” that has already issued deep sea licenses to a number of corporate entities. No actual mining is yet underway, only “testing” the waters – pun intended.

“We need a strong global treaty that puts protection over profit – environmentalism before exploitation,” says Seydel. Such a treaty would establish a global network of ocean sanctuaries off limits to mining, and create a gold standard for assessing environmental impact, according to environmental advocates.

The ISA was established by the UN in 1982 “to control activities in the area” of the seabed, ocean floor and subsoil, “particularly with a view to administering the resources of the area.” According to environmentalists, scientists, fishery industries and others, many of the ISA’s nation members and the current leadership appear to lean toward the side of a “weak” treaty, primarily providing for the management of the ocean’s resources. Translation: profit over preservation.

A global ocean treaty is expected to be voted on by member nations of ISA sometime this year, as early as July.

“We’re simply asking for research to come first,” explains Seydel. “Credible environmental studies (not carried out by the mining industry, primarily fossil fuel-funded companies) . . . to know what is down there before we ruin it. And that will take time. Once we dig it up, there is no turning back the clock.”

Prospectors would have to conduct testing in the areas they apply for licenses to mine, but gaps in scientific understanding make it incredibly difficult to carry out effective baseline and impact assessments for the deep sea, according to a 2018 scientific report, An Overview of Seabed Mining Including the Current State of Development, Environmental Impacts, and Knowledge Gaps.

Here’s some of what we do know about the potential impact of deep sea mining:

For humans, not only is deep sea mining a heartbreak for the potential loss of rare and still unidentified animal life, but also for the extraordinary unknown potential for innovation, including marine genetic resources that might contribute to medical breakthroughs.

And then there is the case for oxygen, the future of mankind, and our planet.

“Oxygen is priceless,” says Seydel, “and the ocean is critical to our oxygen cycle.” She puts it in perspective this way: two of every three breaths we take come from our oceans’ oxygen.

Deep sea mining comes at a very large external cost, she and other opponents warn.

“At a time when we need to cut our carbon emissions in half . . . deep sea mining poses additional risks to climate change, as the process unearths the largest carbon sink in the world,” says Seydel. Just like burning or cutting trees releases trapped carbon, the sea floor stores thousands of years of carbon that deep sea mining would disturb.

Adding DSM to the Urgent Climate Action List: What can we do and why now?

“We can put the risks of deep sea mining on people’s radar, and consider its urgency right up there with other environmental and climate crisis,” says Seydel. While the U.S. is not a voting member of the ISA, she explains, others can tell their member governments that they want a strong ocean global treaty that protects our oceans and their essential resources.

Collectively, we can talk about the issue. Find out which companies are looking to fund deep sea mining and put pressure on them, suggests Seydel, who is committing significant efforts to raise awareness of this issue. “We can divest investments. We can spread the word. Let it be known that we won’t support these corporations or their products,” she says. And money, of course, often speaks loudly enough to change behaviors.

But so can a screaming call for conservation and management of those same rare minerals deep sea miners want to extract. What are the sustainable alternatives? How can we reuse and redesign to use less mineral resources, as the incredible potential of recycled batteries illustrates?

Seydel and others make the case that by living more sustainably, we can reduce the need and therefore the market for environmentally devastating mining.

One scientist revisited the site where some 26 years before – 4,000 meters below the surface – the seabed was first scraped by a licensed exploratory mining operation. “These scientists have been shocked by how ecosystems haven’t even begun to recover over decades,” says Seydel.

This alone makes the case for keeping our proverbial hands off the ocean floor. And the case for adding deep sea mining to the urgent action list for global issues of our time.

Want to know more? Check out these sources: