As countries seek to agree on the rules to make deep-sea mining a reality, the debate over whether this industry has a place in an environmentally sustainable world is growing.

Companies see the activity as necessary to have a low-carbon future but scientists warn it will devastate the last untouched wilderness on the planet. The world is eager for resources to power the green transition. Countries are turning into non-conventional renewable energy and electric transportation to decarbonize their economies, in line with the Paris climate agreement. But to do so they need more minerals including cobalt, lithium and copper, whose consumption is set to rapidly escalate.

The International Energy Agency warned last year that a rise in electric-vehicle battery manufacturing could lead to critical shortages of cobalt around 2025, while a 2017 research by the World Bank suggested that metal demand for batteries will have to increase more than tenfold by 2050 to meet the Paris Agreement goals.

For the mining industry and a group of countries, the solution lies at the bottom of the ocean. In the last decade, there has been an increasing commercial interest to exploit the deep-sea floor resources to satisfy such a rising demand for minerals and metals. Countries are now discussing a “mining code” that would enable companies to operate there.

“We need a lot of metals to enter into the fourth industrial revolution. Most of the metals on land have already been used and it would be an insult to the planet to tear down the rainforest to look for more minerals,” said Dr. Gregory Stone, chief ocean scientist at DeepGreen, one of the companies pushing for deep-sea mining to officially start.

The primary metals and minerals of interest on the bottom of the ocean include copper, cobalt, nickel, zinc, silver, gold, lithium and phosphorites. Some of these, especially cobalt and nickel, are key components of lithium-ion batteries, which are used in everything from cellphones to electric vehicles, now highly demanded across the world. Just the swath of ocean located between Hawaii and the West Coast of the United States — also known as the Clarion Clipperton Fracture Zone — is estimated to possess six times more cobalt and three times more nickel than all known land-based stores, as well as vast deposits of manganese and a substantial amount of copper. 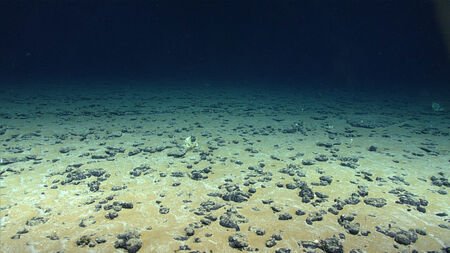 While the seabed is abundant with these materials, little is known about the short and long-term environmental effects of mining 15,000 feet below sea level. The ocean basin has a unique underwater landscape with similar designs to the terrestrial features above it and every year we discover more. Numerous scientific studies have pressed the richness of biodiversity that we are yet to discover.

“We know very little about the deep ocean, which means that if this activity starts we would be losing things that we don’t understand properly,” Louisa Casson, campaigner at Greenpeace Ocean’s team. “In a transition to a sustainable future, there’s no room for these activities. There’s no way to do deep-sea mining safely.”

The lack of data on the deep-sea means that the full impact of mining is unknown. Nevertheless, predictions have been made. Researchers argue the artificial noise and light created by machinery would disrupt many deep water species’ communication systems, and change the environment they have carefully adapted to over millions of years
At the same time, dewatering waste and returning it to the deep sea at many degrees warmer temperatures would affect growth, metabolism and even survival of species, while sediment plumes could suffocate many species to death even at a great distance from the local site.

“Everybody realizes that mining will cause damage to the marine environment and the justification is that we need the metals to fuel the renewable energy economy. But the idea of getting vast supplies from the deep-sea doesn’t make sense. We would need to mine vast areas to make that happen,” Matthew Gianni, co-founder of the Deep Sea Conservation Coalition, said.

All this means that deep-sea mining isn’t a sustainable solution to rising battery demands, scientists and environmental organizations argue. In fact, it seems more like a contradiction to the greener future pressure that caused the increased demands for lithium-ion batteries in the first place.

There’s a growing acknowledgment by governments of the need for system change to sustainable alternative economic models that don’t require infinite resource extraction from our environment. The initiation of large-scale deep-sea mining seems to go in the opposite direction, opening a new part of the world to resource extraction.

The world committed to improving resource efficiency and sustainable consumption and production as part of Sustainable Development Goals (SDG). This requires a global transition from throw-away economies to circular economies, aiming to keep products, components and materials at their highest utility and value all times.

But we aren’t there yet. A 2019 report by the World Economic Forum showed that almost 50 million tonnes of electric waste were dumped into landfills in 2018, a number which grows every year. The volume of e-waste is expected to increase by up to 5% each year as consumers demand more and more smart products.

There are current trends towards responsibly recycling, as tech giants realize the value of e-waste. But it’s not enough, as it’s still cheaper for companies to manufacture from scratch than reuse component parts. Only investing in proper recycling infrastructure, and imposing corporation regulations would truly make a difference.

Proper recycling of e-waste to recover technology metals such as cobalt for reuse in lithium-ion batteries has a number of advantages over deep-sea mining. It would mean a reduced number of polluting e-waste dumps and no destruction of vulnerable marine ecosystems, in agreement with the circular economy purposes.

“We should design new products based on the minerals available,” said Duncan Currie, an environmental lawyer and advisor to the High Seas Alliance. “We need a transformative economy. There are boundaries on the planet and it’s no longer acceptable to create new damage to satisfy our needs. We aren’t in the 19th century anymore.”