10 Ways To School Your Denier Friends on Climate Change 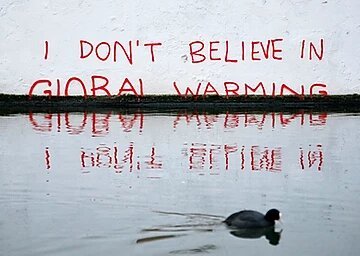 We’ve all been there. At some point in the conversation, the topic of climate change comes up with your friends or family, and you start to cringe when you hear the climate denial coming out of their mouths. From “the climate has changed before” to “humans do not cause climate change” – self-proclaimed climate “skeptics” seem to be sure of their arguments, yet unaware that they are contradicting the scientific consensus on the matter. It feels nearly impossible to stay calm in these conversations, but The Oxygen Project is here to help. Here are our top 10 suggestions on how to handle these situations like a pro.

1. Try to put yourself in their shoes

You won’t be successful talking to someone about climate change’s devastating effects on wildlife when the other person could give two shakes of a tail about wildlife. Figure out what’s important to him/her and base your argument around these specific topics. For example, you could focus on how people are affected by climate change and tailor your case around mass migrations, like those happening in Syria.

2. Be ready to explain how our climate works

While facts are undisputed, it doesn’t hurt to explain in an easy and understandable way how our climate and earth systems work and what is going wrong. The chances are your climate-change-denying friend has no background in environmental science, and climate is a very abstract thing for him/her.

Reposting climate articles and news to your social media is a great way to start engaging in some gentle online activism. It shows your denier friends there’s a strong scientific consensus that climate crisis exists. However, make sure not to participate in a heated online debate on climate change since this will most likely leave you and then even more frustrated.

Why not watch a documentary like “Before the Flood” or “Chasing Ice,” or check out a Youtube video (e.g., Ted talks) together? Of course, you shouldn’t try to force anyone into something they don’t want to do, but suggest it politely or maybe organize a viewing with other friends.

From Olafur Eliasson at Tate Modern to Eco-Visionaries at the Royal Academy of Arts to Arcadia Earth in NYC – more and more exhibitions on the topic of climate change are popping up across the globe. If there’s one near you, why not take your friend along? This is another way to show that there is a consensus on the existence and urgency of the climate crisis.

Some people prefer facts, stats and numbers, but most people are more responsive to stories. Try talking about extreme weather events or environmental catastrophes caused by climate change that have happened in the past few years, and try to convey the human aspect of these events.

7. “Climate change is real, but it is actually a good thing”

You thought your friends were aware of the well documented, negative effects of climate change, but you’re suddenly confronted by one person who actually believes a warmer world is a good thing. This form of denial ignores the negative impacts climate change has on humanity. “Better for agriculture,” “warmer winters sound great,” and “more carbon dioxide for plants to grow” are arguments that make sense to people that just need a little more education on how nature works.

There are people that know about climate change but do not accept that it’s a climate crisis. When talking to them, focus on the harm climate change has already caused, including the fires in Australia and California.

9. “Climate change is real but climate action is too expensive”

There’s always that one friend who understands that climate change is real and that humans cause it, but they’re concerned about the cost of climate action and policies. Reminding them of the potential health hazards caused by climate change and the increasing cost if we postpone climate action should sway their vote.

It is very tempting to go from 0 to 100 when you hear climate change denial, but this will only end badly – so take a breath and stay calm throughout your conversation. Talking aggressively or insulting someone will leave you both feeling angry. Two world views are clashing together, so try to get your points across while staying relaxed and being humorous.