Warning: preg_match(): Allocation of JIT memory failed, PCRE JIT will be disabled. This is likely caused by security restrictions. Either grant PHP permission to allocate executable memory, or set pcre.jit=0 in /home/customer/www/theoxygenproject.com/public_html/wp-includes/load.php on line 43

For decades, large corporations have poisoned rivers, devastated forests and displaced communities, and now they’re rushing to mine minerals from the last untouched frontier on the planet – the deep sea.

The deep sea may be vast and unexplored, but it is incredibly important. It encompasses 95% of the ocean’s volume and is the largest and least explored of Earth’s biomes. Some scientists believe that the deep sea and its water column may be the largest carbon sink on Earth. Plus, new species are still being found there, and sometimes, entirely new ecosystems are discovered.

A UN body called the International Seabed Authority (ISA) is responsible for governing and protecting the deep seabed on behalf of humankind as a whole. In practice, the ISA Secretariat routinely prioritizes the interests of pro-mining governments and companies over the protection of our fragile ecosystems. Since 2001, the ISA has granted 30 exploration licenses for contractors to explore mineral wealth beyond national jurisdiction in the Atlantic, Indian, and Pacific Oceans. These licenses could result in irreversible ecosystem loss.

As citizens concerned about the future of our planet, we ask you to support a moratorium on seabed mining so we can learn more about its potential impact on deep-sea ecosystems.

Do your part to stop deep-seabed mining. Fill out the forms on the righthand column to #defendthedeep.

The Oxygen Project is a proud member of The Deep Sea Conservation Coalition (DSCC), an alliance of over 80 international NGOs and environmental organizations banding together to #DefendTheDeep. Learn more at what these organizations are doing here. Special thanks to Greenpeace International, Sustainable Ocean Alliance, 350.org, Beneath the Waves, Arctic Angels, SeaLegacy, Grounded, ClimateScience, Te Ipukarea Society, Waterkeeper Alliance, and the Deep Sea Conservation Coalition for taking part in this video.

Sign the official letter to the United Nations and International Seabed Authority representatives calling for a 10-year moratorium to stop deep-seabed mining. 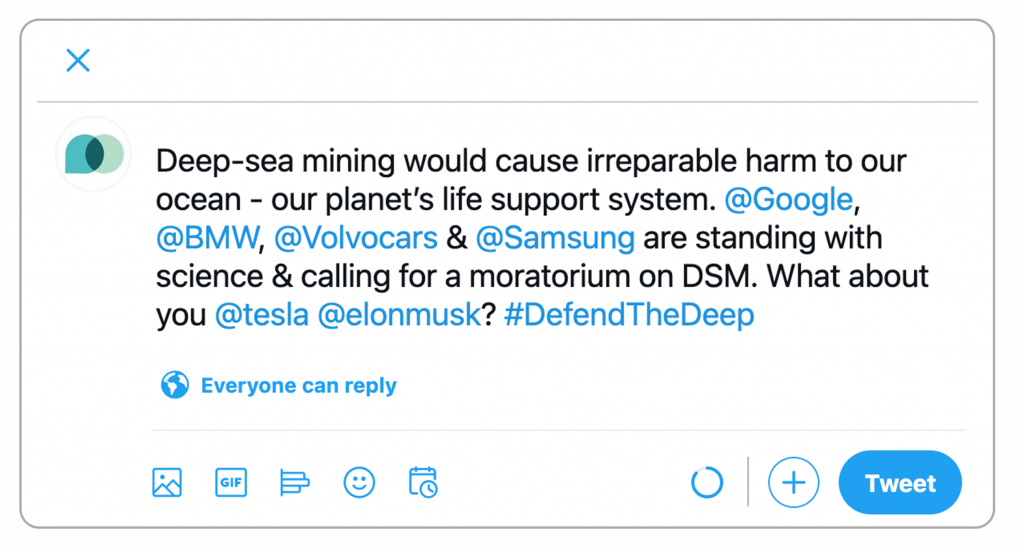 We teamed up with TaskForce and GIPHY to create original, unbranded & shareable GIFs to raise awareness on DSM and advocate for the ocean. Click HERE to download and post shareable content for World Ocean Day, UN World Ocean’s Week and beyond! Remember to #DefendTheDeep!